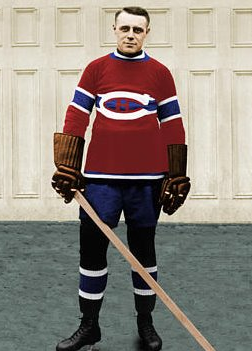 The goal was scored against Clint Benedict of the Ottawa Senators at the Jubilee Arena in Montreal.

Malone scored the goal off a rebound shot from teammate Didier Pitre at the 27 minute mark.

The Montreal Canadiens had to borrow the jerseys belonging to the City League's Hochelaga team for their January 5, 1918, game against the Senators, as the old home arena, the Westmount Arena burned down on January 2, 1918 with their team jerseys inside. The borrowed jerseys are red with a very large white stripe across the chest.

When the NHL was founded in 1917, Quebec did not operate a team its first season and the team's players were dispersed amongst the other teams. Malone was claimed by the Montreal Canadiens. Playing on what was one of the most powerful forward lines of all time with Newsy Lalonde and Didier Pitre, Malone shifted to left wing to accommodate the great Lalonde, and was the NHL's first scoring leader, registering 44 goals in 20 games, a record total that would stand as the NHL's single season goal scoring mark until 1945 and a record per-game average that stands to this day.

At the start of the season, the Montreal Canadiens changed its name to "Club de Hockey Canadien Ltd." from "Club Athletic Canadien". The logo on the jersey was changed to reflect this, substituting the "A" within the "C" with an "H".