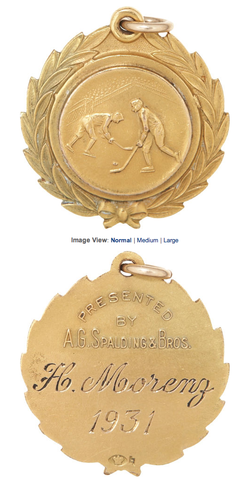 Howie Morenz was awarded this spectacular 1.25" 9 karat gold (9.30 grams) pendant by the A.G. Spalding Bros. company for winning the 1931 Hart Trophy. The famed equipment company was responsible for supplying the early NHL's jerseys and pucks, which explains the connection between A.G. Spalding and this pendant. The front of this treasure depicts an illustration of two hockey players in action, while "Presented by A.G. Spalding Bros. H. Morenz 1931" is engraved on the verso