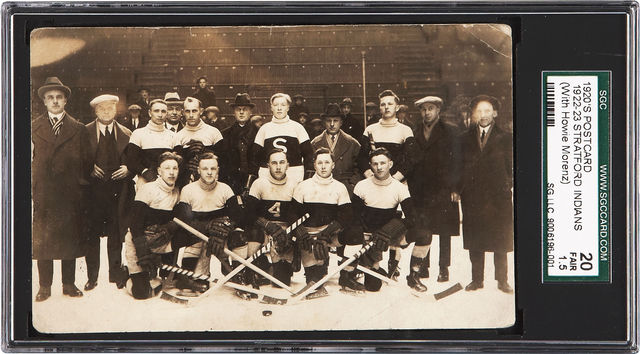 In 1920 Morenz joined the Stratford Midgets junior team (under 20 years old), leading the Ontario Hockey Association (OHA) in assists and points during the 1920–21 regular season, and goals, assists and points in the playoffs. The Midgets won the league title and played in the 1921 Memorial Cup against the Winnipeg Falcons. While Morenz scored a hat trick (three goals) in the second game in the series, the Midgets lost the total-goals series 11–9. His performance in the Memorial Cup tournament earned him an invitation to play for the Stratford Indians, a senior league team, for the 1921–22 season. While he joined the Indians, he continued to play for the juniors as well. During the playoffs, he led both leagues in goals, assists, and points and he also led the senior league in penalty minutes. Playing exclusively in the senior league in the 1922–23 season, he led it in regular season assists, playoff goals, points, and penalty minutes.

During a CNR hockey tournament held in December 1922 in Montreal, Morenz scored nine goals in a game for Stratford. A friend of Léo Dandurand, the owner of the Montreal Canadiens of the National Hockey League, refereed the game and told Dandurand how good Morenz was. Dandurand went to Stratford in January 1923 to watch Morenz play, and decided he wanted to sign him to the Canadiens. In April he met with William Morenz, because at the age of 20, Howie was still legally a minor. William told Dandurand that he wanted Howie to finish his apprenticeship at the CNR factory, which would take another two years. However, in July Dandurand learned that Morenz and his father had been in contact with the Toronto St. Patricks, a rival team in the NHL. Fearing that Morenz would sign in Toronto, Dandurand sent his friend, Cecil Hart, to Stratford with instructions to sign Morenz at any cost. On July 7, 1923, Morenz signed a contract with the Canadiens for three years with a salary of $3,500 per year and a $1,000 signing bonus, a considerable amount for a first-year professional.

Right after signing the contract with the Canadiens, Morenz began to reconsider joining them. Stratford residents, as well as his senior team, wanted him to stay, and Morenz yielded to the pressure. He wrote a letter in August to Dandurand, explaining that he could not leave Stratford, and included the cheque given to him as a signing bonus. After receiving the letter, Dandurand phoned Morenz and told him to come to Montreal to talk in person. In Montreal, Morenz began explaining his reasons for not signing to Dandurand but began crying and could not finish. In response, Dandurand falsely threatened that if Morenz did not join the Canadiens, his professional Hockey career would be over. Hearing this, Morenz relented and agreed to report to the Canadiens' training camp later in the year.