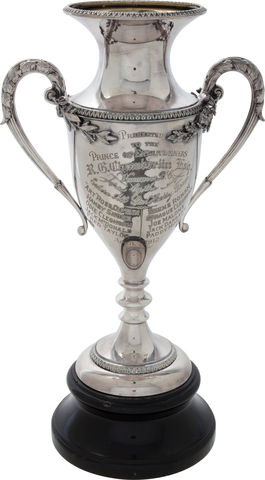 If there was a "Dream Team" of the early 1900's, then the amazing grouping of superstars, featured on this presented trophy would definitely fit that billing. Featuring the best players from the Montreal Wanderers, Ottawa Senators and Quebec Bulldogs teams of 1912, this exquisite silver-plated showpiece, which was presented to the Prince of Entertainers "R.G. Chamberlin Esq." who was the Vancouver B.C. chief of police from 1906-12, features the following Hockey legends' engraved names: Art Ross, Hamby Shore, Odie Cleghorn, Jack McDonald, Fred "Cyclone" Taylor, Skene Ronan, Sprague Claghorn, Joe Malone, Jack Darragh and Paddy Moran - April 1912

These Eastern All Star Ice Hockey Players would play in the 1st All Star Game vs the Western All Stars from the Pacific Coast Hockey Association at the Vancouver Arena & Victoria Arena in British Columbia in April of 1912.

The Western All Stars would win the series 2 games to 1.

CLICK ON printed description above image to see trophy up close

It would be much appreciated,if anyone can shed some light on the other team that played this game and any other information regarding this game.
Thanks