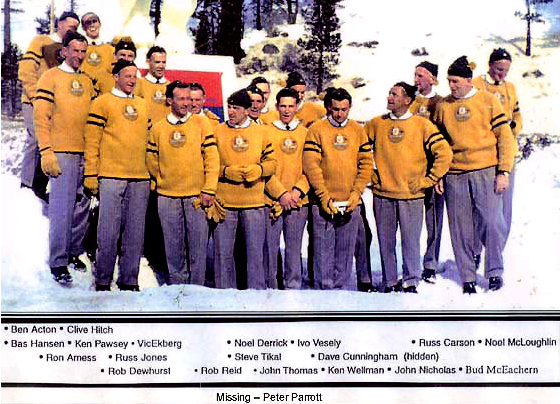 Perhaps Australia's participation in C-Group of these games was made possible due to fewer participating countries than usual. Some Group A teams such as Switzerland, Norway, German Democratic Republic and Poland did not compete. Australia's first entry in the Winter Olympics, while consisting of a single person, was officially sanctioned with the then Australian Olympic Federation evaluating Kenneth Kennedy's entry. However, supervision and support were relatively minimal. Colin Hickey has said that he never got clothing from the Australian Olympic Federation, except for a black armband and tie for the 1952 Olympics, to mark the death of King George VI. He also said that Australian officials had "no control over me ... all they'd do was tell me what times I had to do". Nonetheless, this was the first international showdown for Australian hockey.

The Australian team played six games and lost all of them; one against the Czechs was 1 – 18. The stars were 32-year old David Cunningham who had 6 points (4 + 2) in 6 games and 33-year old Russell Jones who scored 5 points (2 + 3) in 6 games. Other important players were Canadian-born Victor Ekberg and former Czech, Ivo Vesely. The team finished 9th and last, scoring 9 goals and conceding 83 from their 6 games. Australia was unfortunate to open against Czechoslovakia and also played the home team (US). The US had defeated CSSR 7-5 the day before. The end result: CSSR 18, Australia 1 (7:1, 3:0, 8:0). Reid in net for Australia played the entire 60 minutes making 64 total saves (17 in the 1st, 21 in the 2nd and 26 saves in 3rd), while the CSSR goalies Vladimir Nadrchal and Vladimir Dvoracek combined for 14 total saves. Cunningham scored 4 – 2; Jones 2 – 3; Derrick 2 – 1; Ekberg 0 – 2; Thomas 1 – 0, from 6 games each and Hansen scored 1-0 from 4 games. This was the only Olympic ice hockey team Australia has qualified since the sport first became an Olympic event at the Antwerp Summer Games in 1920.