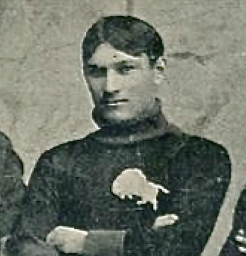 Tony Gingras, a francophone Métis descent, was born October 20, 1875 at Saint Boniface / Winnipeg, Manitoba. The son of François Gingras and Annie McMurray.
Tony was named after his famous grandfather Antoine Blanc Gingras,a founder of St. Joseph, North Dakota (now Walhalla).
He studied at the College of St. Boniface where they built their 1st ice rink in the 1870s. He said that when he was twelve, in 1888, he made a stick from a little tree and cut a slice from a rubber lacrosse ball for a puck. That was before the official start of Hockey in the Canadian West.
He soon became known as a Hockey player and first played Hockey in Montreal, then with the "Vics" of Winnipeg, with whom he won the Stanley Cup in 1901 and 1902.
According to the newspapers of the time, he was gifted an extraordinary skill with Herculean strength and tremendous flexibility. He was also credited with an innovative new Hockey stick of a much more modern design.

He was the first French Canadian to actually be on a Stanley Cup winning team.

After his playing days were over, Tony dedicated himself to coaching minor league teams at the Union Canadienne of St. Boniface as well as at St. Boniface College. He also became a scout for the Montreal Canadiens.

To support his family - Hockey is not as lucrative as now - Tony worked as an immigration inspector. He also had a long career at customs. Married in 1900, he had ten children, 6 girls and 4 boys. He died in April 1937 and is buried in the cemetery of the Cathedral Parish of St. Boniface.