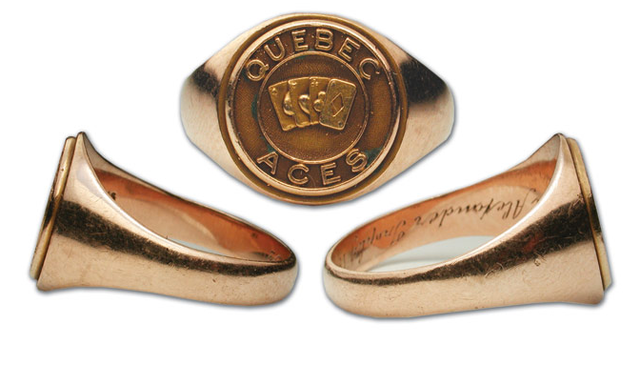 Wonderful memento is from a memorable season of hockey which saw Jean Beliveau stay in Quebec City and play for the Quebec Senior Hockey League's Aces and not join the NHL's Montreal Canadiens. After two years of junior with the Citadels during which time he was treated royally by Quebec fans and management, Beliveau said thank you by suiting up for the Aces.

They played in front of packed houses around the league and at season's end had taken top honors. Beliveau's 83 points, including 45 goals, gave him the scoring title over the Montreal Royals' Les Dougles with whom he staged a season-long scoring battle. Following their victory in the QSHL playoffs, the Aces took care of the St. John (New Brunswick) Beavers and were awarded the Alexander Trophy. This championship ring features the simple style of the times and the Aces logo. The interior of the band is stamped "Birks 10K" while the scripted engraving reads "Winners Alexander Trophy 1951-52".