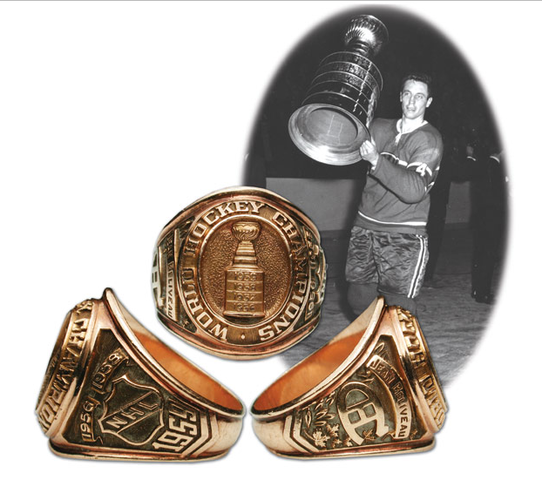 Presented to Jean Beliveau after the Montreal Canadiens won their fourth consecutive Cup, on their way to a record 5 straight. The ‘58-59 season saw the Habs take first place with Dickie Moore and Beliveau finishing one-two in the scoring race. Beliveau's 45 goals, including career #200.

The 1959 Stanley Cup rings were the first ones ever presented to the players in the history of the Canadiens.

The face features a raised image of Lord Stanley's trophy which has the four Cup-winning years listed on the bands of the barrel. Encirling it are the words Canadiens' fans of the era never got tired of hearing, "World Hockey Champions". The Habs logo appears on one shank with "Jean Beliveau" engraved on a banner above. The NHL shield is on the opposite shank with "1956" and "1958" above and "1959" beneath. "Balfour" and "10K" are stamped on the interior of the band.