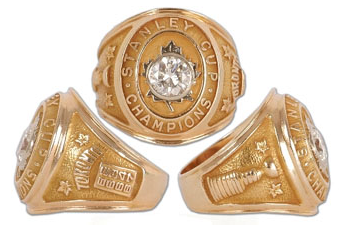 A treasure hunter searching in Florida waters came across a true Canadian find — a Stanley Cup ring marking the last time the Toronto Maple Leafs were able to clinch the Hockey championship.

The ring has been missing for some thirty years. It belonged to former Maple Leaf right-winger Jim Pappin, the player who led his team during the 1967-68 season playoffs with seven goals and 15 points.
Pappin said he was so disillusioned with the Leafs after they traded him to the Chicago Blackhawks a year after he won the Cup, he gave his ring to his father-in-law.
“I definitely wasn’t going to wear a Toronto Maple Leafs Stanley Cup ring and play for the Chicago Black Hawks. In the old days of six teams, you hardly spoke to the opposition, even in the summertime,” Pappin told CTV Newsnet in an interview in Toronto.
Pappin said his father in law, Peter Kyrzakos, was a “big fan” of the Toronto team, and wore the ring faithfully until he lost it sometime in the1970s during a stay at his vacation home in Vero Beach, Fla.
Kyrzakos was so distressed, he hired people and divers to look for the ring, but to no avail. Too upset to tell Pappin, he asked former teammate Eddie Shack for his ring so that he could have it replicated. Kyrzakos only told Pappin about the lost ring in 1982 when his daughter and the Hockey player divorced. He gave Pappin the replica and the two remained close until Kyrzakos died in 2004.
“I was fine with it. It’s just a material thing,” said Pappin. Besides, he added, his father-in-law paid $4,000 to have the ring remade. “So basically it’s the same ring.”
Pappin said he never thought about the ring again until the treasure hunter gave him a call from Florida.
Early in August, Mark DesErmia was in the Gulf of Mexico, off the shores of Clearwater Pass, Fla. with an underwater metal detector when it detected the missing treasure with Pappin’s name inscribed on the inside. DesErmia said he’s been offered $20,000 for the ring but that he would gladly give it back to Pappin for less.”What’s amazing is that the guy wants to give it back to me,” said Pappin.
Pappin wouldn’t reveal what he agreed on with DesErmia when it comes to a reward, but he added Thursday that he hopes to sell the replica. “I’ve already been told it’s worth between $10,000 and $20,000,” he told Newsnet.
“And (DesErmia) will benefit by that. I told him today that, you know, ‘you’re not getting what we agreed to. Whatever we benefit from this ring, we’ll figure out.’”
The ring also has special meaning for Pappin’s daughter, who is getting married next week. She was very close to her grandfather and having the possession he treasured would be just like having him there with her, Pappin said.