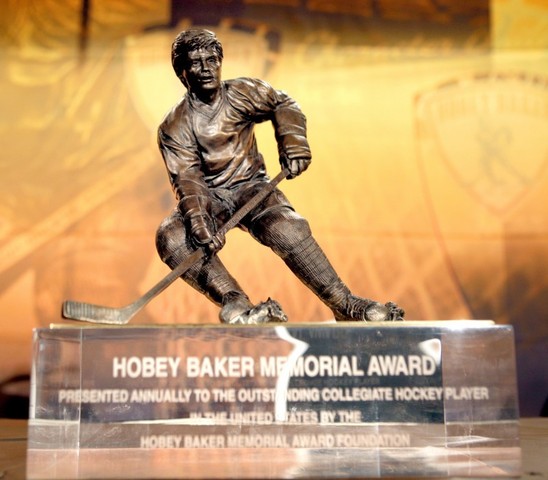 The first award was given in 1981 to Neal Broten of the University of Minnesota who was also the model for the bronze sculpture that comprised the actual Hobey Baker Memorial Award trophy.

Who was Hobey Baker
Hobart Amory Hare Baker (January 15, 1892-December 21, 1918), known as Hobey Baker, was a noted athlete and fighter pilot of the early 20th century. He was born in Bala Cynwyd, Pennsylvania, a suburb of Philadelphia and attended St. Paul’s School in Concord, New Hampshire, where Malcolm Gordon was coach of the ice Hockey team, graduating in 1909. In 1910 he enrolled in Princeton University and during his time there he was elected to the Ivy Club, while also playing baseball, football and Hockey. By the time he graduated, he had led Princeton to a national championship in football (1911) and two national championships in Hockey (1912 and 1914). Baker was also famous for his refusal to wear headgear in football and for the fact that he was penalized only once during his entire Hockey career at Princeton.

Following graduation, Baker worked at J. P. Morgan Bank in New York City and played for the St. Nicholas Club in Manhattan, one of the top amateur clubs in the United States (there was no professional American Hockey at that time). He enlisted in the U.S. Army as a pilot upon the country’s entry into World War I and left for Europe in 1917. By 1918, he was a member of the Lafayette Escadrille, commanding the 103rd Aero Squadron and painting his Spad XIII orange and black in honor of his alma mater.

Contrary to the newspaper accounts of his day, however, Baker was not an ace. He had only three confirmed kills to his name, rather than the necessary five, although he was awarded the Croix de Guerre by the French government for his service. He was killed in a plane crash just weeks after the armistice while test flying one of his squadron’s newly repaired Spad’s near Toul. Ironically, his orders to return home to the United States were found tucked inside his jacket.