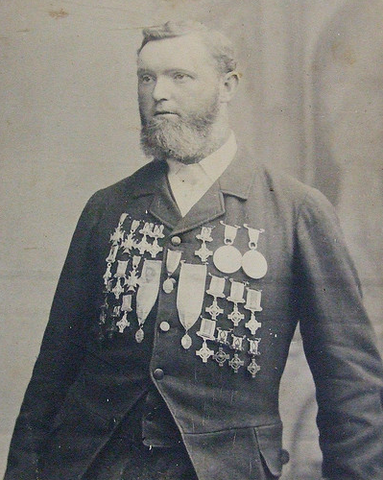 He was born in a Suir, County Tipperary. He became an extremely talented athlete and achieved international fame in the 1870s when he held numerous world records for running, hurdling, jumping and weight-throwing. In fact at a time he was regarded as the best athlete in the world.

Davin wrote "the laws under which athletic sports are held in Ireland were designed mainly for the guidance of Englishmen, and they do not deal at all with the characteristic sports and pastimes of the Irish race. Irish football is a great game" he wrote, "but there are no rules for either hurling or football and they are often dangerous.

Together with Michael Cusack, of Carron on the eastern fringe of The Burren, County Clare he called a meeting in Hayes’s Commercial Hotel, Thurles, County Tipperary, on 1 November 1884, and founded the Gaelic Athletic Association (GAA). In that meeting they established ""a Gaelic athletic association for the preservation and cultivation of national pastimes.

Many top games including the 1904 All-Ireland Senior Hurling Championship Final between Kilkenny and Cork were played on Davin's farm.

The Davin Stand in Croke Park, Dublin is named in his honour as are some GAA clubs throughout the country including Carrick Davins in Tipperary.